In a word: POLYCHAETE 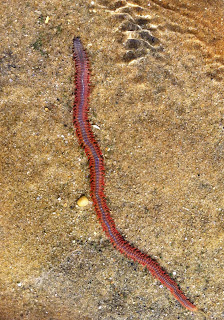 Cape Cod, Low Tide: At which time I happen upon one of the common yet ever fascinating tidal annelids—in this case, a rag worm, or clam worm (variously Alitta virens [alternatively Neiris virens, King rag worm] or Hediste diversicolor [alternatively Neiris diversicolor, Red rag worm]), additionally known by the common monikers pileworm, musselworm, and sandworm. Presented with such divers names from which to choose, I think one may therefore feel justified in referencing these primitive, ancestral creatures in any way that most appropriately suits his or her—taste, as it were, while thereby continuing the centuries-long frustration in satisfactorily classifying the members of the Family. The result is a sense that there have been as many reevaluations of the taxonomic plan as there are parapodia on a specimen.
¶ This bejewelled and not insubstantial fellow photographically captured by the author just before it began its steady and deliberate burrow into the sand.
Posted by Simon M. Sullivan at 10:08 AM